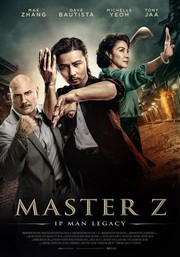 Once the poster child for the fact that over night successes are often decades in the making, Thai martial arts star Tony Jaa now appears destined to go down as a case study in the fleeting nature of fame.
When Jaa first burst onto the scene in 2004's Ong Bak he was hailed around the globe as the savior of martial arts film, the fresh new face that would bring fresh energy back into a genre increasingly populated by aging stars. His big debut was a massive success in Thailand and around the globe, Hong Kong screen fighter and choreographer Donnie Yen openly stating that Jaa had beaten Hong Kong at their own game. Yen would acknowledge using Ong Bak as a motivating force to do better in his own work, a move that led to the peak output in Yen's lengthy career.
The initial acclaim completely ignored the fact that Jaa was in fact not a newcomer at all but had been working with stunt choreographer Panna Rittikrai as a member of his stunt team for over a decade previously, with his first significant screen credit coming in a 1994 low budget Thai offering and Jaa getting a taste of the big time working as Robin Shou's stunt double in Mortal Kombat: Annihilation. Jaa's overnight success had actually come as the result of over a decade of hard work and toil in obscurity and now it appears as though his peak may have lasted for a mere two pictures.
Here's the box office breakdown.
The initial Ong Bak hit in 2004, grossing roughly two and a half million dollars at the Thai box office - a big number at the time - while pulling roughly another seventeen million in international theatrical play. Suddenly Jaa was the biggest name in the international fight world and the entire Thai action film industry was reinvigorated.
There was a bit part in support of his Ong Bak co-star Mum Jokmok's star vehicle The Bodyguard next, but then it was on to bigger and better things with the much higher budgeted effort Tom Yum Goong, released internationally as The Protector. With its much higher price tag there was much more risk but it paid off with greater rewards: Another chart topping performance in Thailand where it grossed nearly four and a half million, another twelve million in the US and another eleven or so in the rest of the world. Though critics were not kind to the script of the film or to Jaa's wooden dramatic performance it appeared his star was sealed and the big Hollywood offers came rolling in, all of which were turned down.
Next came another Bodyguard movie and then the wheels came off.
After months of speculation as to his next project word began to circulate that Jaa's relationship with Ong Bak director Prachya Pinkaew had broken down over Jaa's insistence that he didn't need Pinkaew anymore and that he wanted to direct himself. Pinkaew disagreed but the studio Jaa was signed with sided with their most bankable star and gave Pinkaew the task of launching female fight star Jeeja Yanin in Chocolate while handing Jaa what was far and away his biggest budget to date to make his directorial debut with prequel film Ong Bak 2.
To say this was a disastrous move is a gross understatement.
As already reported in detail Jaa had a complete meltdown on set and simply disappeared for two months. The film enormously behind schedule and wildly over budget when he was found and returned to work the director's role was taken away from Jaa and handed to his mentor Panna Rittikrai while the studio, desperate for any chance to recover their massive cost over runs, made the decision to enforce some last minute rewrites and split the film in two - thereby spreading the costs out over a pair of pictures and giving themselves a better chance of recouping. The result?
Despite the large budget and massive sets the news of Jaa's behavior coupled with a shoddy script resulted in Ong Bak 2 pulling in only 2.9 million at the Thai box office, more than Ong Bak but still a significant loss given the investment. The bigger blow occurred internationally where the lengthy delays and problems in production led to several international distributors - original US distributor The Weinstein Company among them - backing out of their advance deals and forcing Sahamongkol to renegotiate with new distributors at lower values. When it came to international theatrical release the US run reported only slightly above a hundred grand at the box office while the overall theatrical dropped from Tom Yum Goong's twenty three million from the world outside of Thailand to only six.
The news is even worse for Ong Bak 3. With the year end lists now out we can see how the film fared in Thailand. Not only did Ong Bak 3 fail to top the charts, it couldn't even crack the top five domestically produced titles, landing instead in seventh position overall with a mere 1.3 million take. That's less than half of the business Ong Bak 2 did at the Thai box office despite being a direct continuation of the story, a sure sign that the local audiences lost interest. Yes, the Red Shirt protests were occurring when Ong Bak 3 released and that certainly would have had an impact but not nearly enough to account for a drop off this steep. And internationally the total currently sits at roughly only a million.
The rise of VOD releasing in North America - it is still much less prevalent internationally - over this time frame will have had an impact on the theatrical numbers but, still, the trend is shockingly clear. After rising to incredible heights Jaa has come crashing back to earth hard. The question now is not what will he do next but whether he even has an audience to come back to.